Hale’iwa Beach House in Haliewa offers some super good food at a moderate price. The restaurant has an upscale feel, and has a great vibe next to the ocean.

While my wife and I were toodling around Oahu’s North Shore, we decided to scout out a place for lunch. Finding a good restaraunt on Oahu is hardly difficult: go five yards and you’ll find one! Hale’iwa Beach House is a stone’s throw from the Spicy Indian Chick and Giovanni’s Shrimp Truck. After a brief search on Google Maps, she found the Hale’iwa Beach House, and we decided to give it a go.

I confess that as we drove up and parked, I could feel my wallet puckering up. If you check out the photos on their web site, you’ll see that it doesn’t look like a casual restaurant. Once I scoped out their menu, I was pleasantly surprised: the prices were very reasonable, even for the dinner menu.

I had the Fish & Chips. The “chips” were their signature Beach House Fries, and holy crap were they good! I don’t even remember now what the fish was, but it was battered and fried and was also quite good. The portion size was generous. I was starving and ate the whole damn thing. I could have easily (and should have) taken half of it home to have later.

Jan had the Kalua Pork Sandwich, but without the bun to keep it gluten free. She also had some veggies on the side. While the pork was really good, it was one of only a few gluten free options.

I’d give the Hale’iwa Beach House a solid four stars for both the food and the setting. We had a great view of the ocean from our table, and the restaurant itself is really cool looking. 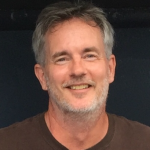